This is a story of the irresistible force and the immovable object. I regard me as the former and my (dis)-loyal opposition as the latter. Anyone is welcome to reverse the assignment if they wish. It seems the crux of the matter is, what is the image (blood or paint)? If we could answer that question to the satisfaction of the irresistible force and the immovable object, we could all be friends again. My modest contribution toward that goal is to show four pictures.

Shortly after I learned through careful study of the 32 sticky-tapes taken from the Shroud that the image substance was paint, I made up two paints; one with pigment (red ochre) and gelatin solution and the other with diluted blood. The red ochre paint was 0.01% pigment and 0.01% gelatin in water. The blood paint was 3% whole blood in water. I made up these two paints for two reasons: first, to determine the amount of iron (as red ochre) that is needed to register a visible image (it turned out to be about 3 micrograms per square centimeter); second, to compare sticky tape samples from linen cloths painted with both paints. The red ochre-painted linen yielded tapes indistinguishable from the Shroud tapes. I have chosen these four pictures to illustrate those results: 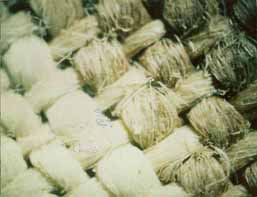 Figure 1. Real blood on a linen cloth.
Note the color is brown and not the red color normally associated with (fresh) blood. Low magnification, about 5X (see Judgement Day For The Turin Shroud, p. 95, Figure 23). 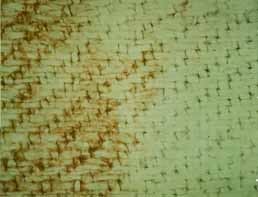 Figure 2. Shroud “blood” on linen.
This is also a low magnification shot taken of a “blood-image” area 3-FB (small of the back) taken by Pellicori and Evans in 1978. Note the red color unlike blood (Figure 1), magnification 12X (see Judgement Day For The Turin Shroud, p. 87, Figure 16). 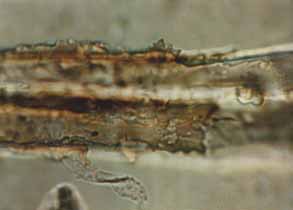 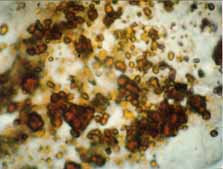 
These figures show conclusively that the Shroud “blood” images are paint. I don’t understand how anyone could draw any other conclusion from those results.

There are none so blind as those who will not see…

There is NO blood on the Shroud. The Shroud is a beautiful painting by an inspired medieval artist.

Anyone wishing to continue in the delusion that the Shroud is an actual burial shroud can follow: www.shroud.com.