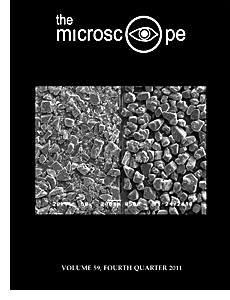 On the cover:
An SEM secondary electron image of fluticasone propionate, a synthetic steroid used to treat asthma, and carbamazepine, an anti-convulsant. The sample was sputter coated with platinum. See Anomalous Atomic Number Contrast in Compositional Backscattered Electron Images of Organic Compounds Due to Cathodoluminescence by Gary Nichols.

Gary J. Laughlin
The Microscope 59 (4), p ii
Excerpt: Sometimes, it is all about contrast, but what is contrast anyway? It is usually thought of as the ability or sensation of perceiving visual differences in brightness: light or dark. Relief, a form of contrast, is related to optical path-length differences and presents itself with the impression of light and shadow in a 3-D sort of way. But there is much more to it than that — and the microscope, light or electron, in the hands of a well-trained and observant microscopist is often capable of enhancing the observed subtle differences in brightness that occur microscopically far below the limits of detectability of the eye — and sometimes beyond the ordinary limits of resolution. Full article (PDF)

Gary Nichols
The Microscope 59 (4), pp 147-163
Abstract: It is generally accepted that when multi-component materials are examined with a scanning electron microscope, the contrast differences observed using compositional backscattered electron imaging are due to variations in their average atomic numbers. With increasing atomic number, there is an approximate monotonic increase in backscatter coefficient, which is observed as an increase in the brightness of specimens. However, what seems to be less generally appreciated is that light emitted from cathodoluminescent compounds, especially organic compounds, will also contribute to the brightness in backscattered electron images, and this may result in anomalous compositional contrast. Backscattered electron detectors used with scanning electron microscopes are either a scintillator or a solid state semiconductor and, in addition to detecting high energy backscattered electrons, these detectors also happen to be very sensitive to light. Anomalous contrast had been observed with several organic pharmaceutically relevant compounds materials, where the images of some low average atomic number materials were unexpectedly brighter than those having higher average atomic numbers. This anomaly was found to be caused by cathodolumi-nescence. This discovery was a revelation because, if the published literature is an accurate guide, then organic compounds are rarely reported as being cathodoluminescent, whereas there is an abundance of information about the cathodoluminescence of numerous inorganic materials, especially minerals, ceramics and semiconductors. This paper describes several experiments using compositional backscattered electron imaging, elemental X-ray microanalysis and cathodoluminescence spectroscopy, which were performed to explore the cathodoluminescent behavior of several organic compounds that give rise to anomalous image contrast. Full article (PDF)

Brian J. Ford
The Microscope 59 (4), pp 165-173
Excerpt: Funny stuff, blood. All that transport of oxygen and nutriments works so well and is perfectly comprehensible — until the blood starts to clot. That’s when the problems begin. There is a serious anomaly in the way hemostasis is supposed to work. It was years before I found the answer, and I would never have imagined that, in the fullness of time, my discoveries would be called a “scientific highlight” in the press. Finding the answers to problems that others have not considered has always been a source of fascination. The coagulation paradox fell neatly into this category. Full article (PDF)

Patrick S. Chepaitis, James R. Millette and Tim B. Vander Wood
The Microscope 59 (4), pp 175-180
Abstract: The mechanism of formation of a plerosphere, a type of coal fly ash particle that contains microspheres, has proven difficult to describe, especially when considering the role of the hollow spheres named cenospheres. Thirteen fly ash samples were studied using scanning electron microscopy (SEM) and X-ray energy dispersive spectrometry (EDS) in order to gather new information about the basic mechanism. The identification and study of thin-walled cenospheres provides key evidence in support of a previously proposed theory in which plerospheres are formed by the capture of smaller fly ash spheres after implosion of cenospheres. Full article (PDF)